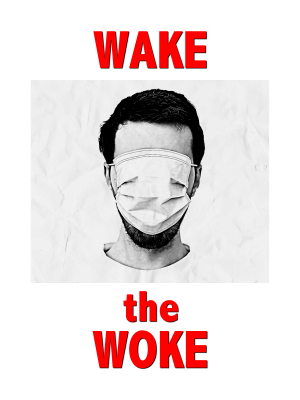 TRUTH OR CONSEQUENCES, NEW MEXICO—In a surprising move, the Woka-Wola® Company, based in CHAZ CHOP wherever, has decided to immediately shift its community-uniting efforts away from peaceful riots to production of a new soft drink: Diet Woke™.

Food scientists at Technical Tech University in Kalamazoo, thanks to generous research grants made possible by Governor Gretchen Whitmer’s “Make Michigan Communist Again” Foundation, were surprised to learn that by combining such toxic ingredients with top-notch marketing and media sponsorship, they were able to make over ninety percent of their target demographic believe they were actually drinking Kool-Aid.

“The results have been highly promising,” said Dr. Gavin Newscum. “The only side effects so far have been minor: nausea, vomiting, paralysis, and the occasional death—in all, on a par with COVID-19 vaccines.”

The most interesting “side effect” observed in clinical trials of Diet Woke™ is a pronounced tendency to believe mainstream narratives to the point of being willing to engage in physical violence and tell outrageous lies to make them seem true.

Not unexpectedly, this development has caused many conspiracy theorists to assert—without, naturally, any proof whatsoever—that Diet Woke™ actually grew out of the CIA’s Project Mockingbird as a type of “gullibility serum” designed to work hand in glove with standard media propaganda in brainwashing the American public to believe its government.

“Everyone knows Project Mockingbird didn’t really exist,” commented Lucy Faxy, a professor of Revisionist History and Weaponization of Racial Fault Lines at Brown University and cofounder of the Woka-Wola® Company who worked side by side with Bill and Melinda Gates in vaccinating and paralyzing nearly half a million children in India in order to make sure they didn’t contract polio. “And even if it did, who cares?”

Admittedly, Diet Woke™ isn’t for everyone—especially those who value their physical and mental health as well as the overall health of the body politic. But clearly, given its “crack-like ability” (to quote Hunter Biden from bed via laptop) to make any social situation palatable, including one in which we happily destroy our own economy and willingly wear useless masks that give us brain damage and lung cancer, Diet Woke™ is here to stay.