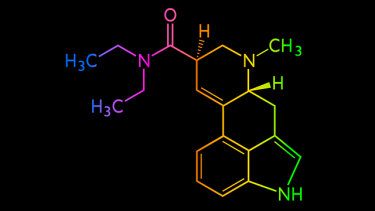 The shifts in consciousness brought about by psychedelics could help to dissolve our fear of the other.

“Microdosing” on psychedelic substances like LSD—ingesting just enough to heighten cognitive faculties, enhance creativity, improve concentration and alleviate depression—is currently back in vogue among people not normally associated with anything remotely “countercultural” in the USA.

The term psychedelic was coined in 1958 by British psychiatrist Humphrey Osmond and is derived from the Greek words psyche (“soul, mind”) and delein (“to manifest”), hence “soul-manifesting,” the implication being that psychedelics can access the soul and develop unused potentials in the human mind. It’s a contention that’s gaining increased acceptance in mainstream universities.

New York University, for example, is hosting clinical trials using psilocybin to treat alcohol addiction. The Multidisciplinary Association for Psychedelic Studies (MAPS) has been at the forefront of research in treating patients suffering from chronic treatment-resistant PTSD (Post Traumatic Stress Disorder) with MDMA, commonly known as Ecstasy. The Food and Drug Administration (FDA) recently designated its MDMA-assisted psychotherapy project as a “breakthrough therapy.” Apart from MDMA, MAPS also advocates the use of Ayahuasca, Ibogaine and medical marijuana for a variety of conditions ranging from bipolar syndrome and drug addiction to autism-related disorders, ADHD and clinical depression.

The therapeutic use of psychedelics isn’t new. Between 1953 and 1973, the US federal government funded over a hundred studies on LSD with more than 1,700 subjects participating. Psychedelics were tested on convicts, substance abusers, people suffering from chronic depression and obsessive-compulsive disorder, schizophrenics and terminal cancer patients. LSD was also tested on artists and scientists to explore its effects on creativity, and on divinity students to examine spirituality from a neuroscientific perspective. The empirical data gathered from these tests was largely positive.

LSD “truly was an acid, dissolving almost everything with which it came into contact, beginning with the hierarchies of the mind … and going on from there to society’s various structures of authority,” says author Michael Pollan in his book HOW TO CHANGE YOUR MIND: THE NEW SCIENCE OF PSYCHEDELICS. And that’s what makes this subject socially and politically interesting.

“It is curious to me that what I see as the two greatest threats—environmental crisis and [political] tribalism—these drugs directly address both those mindsets,” Pollan told the GUARDIAN in a recent interview. “They undermine our tendency to objectify nature, to think of ourselves as separate from it. They undermine tribalism in that people tend to emerge from these experiences thinking that we are all more alike, all more connected.”

If this is true, then those of us committed to social transformation must start to take the use of psychedelics much more seriously. But what’s the actual or potential connection between LSD and politics?

It was a Swiss chemist called Albert Hoffman who discovered the drug by accident in 1938. While conducting research on another pharmaceutical compound he absorbed the drug through his skin and staggered home to lie down on his sofa, where, “in a dreamlike state, with eyes closed,” he wrote later, “I perceived an uninterrupted stream of fantastic pictures, extraordinary shapes with intense, kaleidoscopic play of colors.” Hoffman felt he had been given the keys to unlocking the mysteries of the universe, “the mystical experience of a deeper, comprehensive reality.”

A few decades later in August 1960, Timothy Leary, a clinical psychologist from Harvard University, traveled to Cuernavaca in Mexico and ingested psilocybin (“magic”) mushrooms for the first time, an experience that radically altered the course of his life. In 1965, Leary commented  that he had “learned more about … (his) brain and its possibilities … [and] more about psychology in the five hours after taking these mushrooms than … in the preceding 15 years of studying and doing research in psychology.” Leary became a lifelong evangelist for the therapeutic benefits of psychedelics.

Theoretical physicist Carlos Rovelli, author of THE ORDER OF TIME, says his romance with quantum theory and the mysteries of the space-time continuum were sparked by his LSD trips as a student radical at the University of Bologna. “It was an extraordinarily strong experience that touched me also intellectually,” he told the GUARDIAN. “Among the strange phenomena was the sense of time stopping. Things were happening in my mind but the clock was not going ahead; the flow of time was not passing anymore. It was a total subversion of the structure of reality. How do I know that the usual perception is right, and this is wrong?”

Rovelli has spent the better part of his life grappling with the relationship between space, time and consciousness, fundamental concepts that underlie existence and how we simultaneously perceive the world and shape it. “If I observe the microscopic state of things,” he writes, “then the difference between past and future vanishes … in the elementary grammar of things, there is no distinction between ‘cause’ and ‘effect.’” The concept of time, he says, “has lost layers one after another, piece by piece.” We are left with “an empty windswept landscape almost devoid of all trace of temporality … a world stripped to its essence, glittering with an arid and troubling beauty.”

Large parts of the world are being polarized at a rate rarely seen before, helped in no small measure by social media “filter bubbles” and algorithms that divide people sharply along the lines of nationality or ideology, their underlying human connections rendered increasingly irrelevant. Perhaps such deep hatred and suspicion of the other was always there, but now it has taken center stage and is being used as a potent election strategy by populist and hyper-nationalist leaders the world over. Like herds of cattle, large numbers of people are being programmed and deployed as pawns for a larger agenda.

Therefore, perhaps real change begins with rewiring our perceptual framework. Psychedelic substances have been ingested sacramentally by indigenous cultures to achieve this goal since the dawn of time, and now they’re being validated by the scientific and medical communities. The shifts in consciousness that can be brought about by psychedelics can help in dissolving the man-made boundaries or fear of the other that are implanted in our collective psyche.

While Silicon Valley bio-hackers microdosing on LSD to enhance their workplace performance may not be looking to bring about tectonic shifts in collective consciousness, there’s no reason to restrict the use of psychedelics to these groups and purposes. They could also work as a potent catalyst to awaken humankind to the dangers of toxic nationalism and rabid nativism that threaten to engulf us.

This article was originally published by openDemocracy under a Creative Commons license.

Vikram Zutshi is a filmmaker, independent scholar and columnist based in Los Angeles. His debut feature MAX KENNEDY AND THE AMERICAN DREAM was filmed at various points along the two thousand mile US-Mexico border and has since been globally broadcast. He writes frequently on Art, Religion, Politics, Culture and Cinema and is currently in post-production on a new film called DARSHAN. Follow him on Twitter @getafix2012.