The question is this: Is the “cure” actually worse than the disease? And unless we ask the hard questions, how will we ever know? —B.D.M.

An elderly woman sits on a park bench in England with no one nearby. Police draw near—apparently protected from covid-19 by their law enforcement costumes—to intervene and issue her a hefty fine …

Paris bans outdoor exercise during the day with disobedient joggers facing the threat of 6 months in jail.

Medical “authorities” at the WHO threaten “to enter homes and remove family members” in order to impose isolation on them.

Flashing signs at beaches in Australia warn visitors to monitor their “sand time” (without specifying how being on the sand might suddenly become “dangerous”—and after how long).

Innocent travelers are randomly pulled over and questioned—Nazi/Soviet-style—as to the purpose of the most mundane and innocuous voyages. “Papers please.”

Police in England threaten to literally examine the contents of people’s shopping trollies to make sure people only buy “essentials.”

Crosses mark where we can stand “safely” in line for an ATM—fortunately the virus seems not to be able to move sideways between people standing in lines, but only forwards and backwards.

I wish I was making even just a FRACTION of this up, but these are all REAL examples. 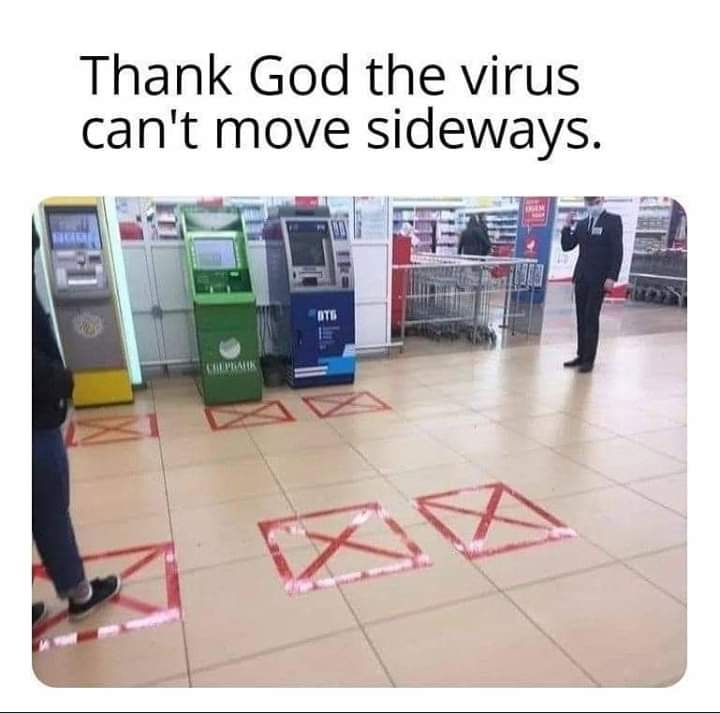 Regardless of your viewpoint on the coronavirus itself, it seems high time that we all assess the merits of the countermeasures being employed by governments around the world to fight COVID-19.

I want you to seriously entertain an uncomfortable question—consider it a thought experiment.

The question is this:

By trying to “flatten the curve” using current methods are we actually going to ruin lives and kill people at a higher rate than this apparent flu-like condition—that appears less and less threatening by the day—ever could?

Consider “social distancing” and self-quarantine, a couple of supremely Orwellian terms. We are told this is to “flatten the curve” and prevent the spread of the dread disease (an idea which increasing numbers of medical professionals and scientists are challenging).

We are, paradoxically, “united” in our isolation.

What are the impacts of this isolation? Might there be unintended consequences for mass enforcement of these measures? Let’s take a look.

Everyone knows the elderly represent a more susceptible demographic. Government rhetoric tells us that the radical social measures will “protect the vulnerable” such as the elderly—but how true is this?

In a study by Krumholtz on elderly people who were hospitalized for congestive heart failure, it was found that those who had no one to rely on for emotional support were three times more likely to have another episode requiring a return to hospital than the patients who had warm relationships.[i]

This speaks to the powerful psychosomatic component of health—part of the puzzle conspicuously absent from mainstream discourse, which—you may have noticed—focuses the COVID-19 narrative entirely on the idea of vengeful microbes floating around waiting for an unsuspecting human host.

In 2003, Dr. Sheldon Cohen, a psychologist at Carnegie Mellon, published the results of his intentional attempts at trying to give common colds to people, in a study featuring over 300 volunteers.[ii]

He wanted to test whether sociability predicted resistance to infectious conditions.

What Cohen and his colleagues found was that “sociability was associated with greater resistance to developing colds.”

All things being equal, simple exposure was clearly not the be all and end all. Cohen et al. also had something to say about cortisol: “Sociability was associated with lower concentrations of … cortisol and the SNS hormone epinephrine.”

It is generally recognized nowadays that chronically elevated levels of cortisol have an immune-damping effect.

Consider the impact, then, of the systematic shutdown of virtually the entire global economy and resulting plague of joblessness, poverty, and pressure to provide for family and dependents—a surefire recipe for chronically elevated cortisol levels from these raw survival anxieties.

And then add on top of that the bonus of social deprivation (let’s call it what it is)—which ALSO has an immune-damping effect.

So, on the one hand, our loving governments have unleashed a pandemic of stress and anguish due to the wholesale destruction of the global economy and resulting Depression (yes, it’s well underway)—and on the other hand we have the Orwellian ban on free socialization, depriving countless people of the most valuable thing in a time of crisis: an empathetic human touch.

We are not robots.

Studies done on babies have shown that those reared without physical contact suffer in a multitude of ways, including the stunting of natural physical growth.

Monetary tensions in a household are part of the texture of urban life and the stuff of legend. It’s axiomatic that finances are a common source of conflict in the home. Consider the amplification of general household stress a Depression-level event like this global shutdown brings.

Like a lottery win—or a PCR test—the coronavirus lockdown situation is an amplifier of what is already present.

How does this bode for the health and immunity of people in tough—or even abusive—relationships?

What Cohen found in his work was that participants who had an ongoing personal conflict were 2.5 times as likely as the other volunteers to develop a cold, which put rough relationships in the same causal category as vitamin C deficiency and sleep deprivation! [iii] 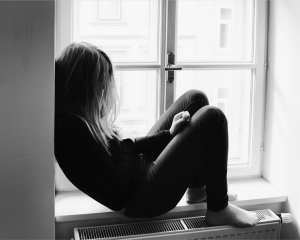 But the hits keep coming.

In earlier phases of these studies, Cohen found that, of 276 volunteers exposed to rhinovirus:

The people with the weakest social support levels were 4.2 times more susceptible than those with robust sociability. Although smoking, poor sleep quality, low vitamin C, elevated catecholamine levels, and even introversion were all associated with greater susceptibility to colds, they were not as important as the social support and connection felt by participants.[iv]

This means loneliness was even riskier than smoking in terms of developing a cold/upper respiratory illness.

Consider this information in light of the “COVID situation,” where we are being trained to view each other with fear and suspicion—and “self-quarantine” at home. What effect does that have on people living alone? Or a single parent with an energetic child? An elderly widow/er?

Where has any of this information factored into our loving governments’ actions?

In short, Cohen’s studies showed that the more we socialize the less susceptible our immune systems become. Vibrant social connections are mood-boosting, which creates a neutrotransmitter cascade and epigenetic response that augments our immunity.

The “paradox” (and it’s only a paradox if you’re a militant subscriber to Germ Theory and ignore the mind-body connection and Terrain Theory) is that relationships protect us from the “risk” of exposure to the very infectious conditions many of us assume they pose.

A good hug releases oxytocin, dopamine, and serotonin. It stimulates the vagus nerve and helps you relax, according to psychologist Tiffany Field. It can decrease your heart rate and trigger a drop in the stress hormones cortisol and norepinephrine. 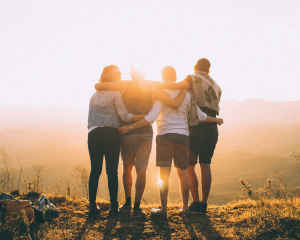 is this mentioned in the COVID-19 narrative?

But in truth we are crawling with trillions of microbes and constantly exposed to all sorts of them in the course of a day—yet we remain okay. It is now estimated there are some 380 trillion viruses in our bodies—aka the virome! And don’t forget the 60 trillion bacteria in us.

Even Louis Pasteur, the godfather of Germ Theory (and a plagiarist), admitted that, “The microbe is nothing. The terrain is everything.” Indeed, these are said to be among his last words before he died.

Not satisfied, in 2015 Cohen replicated his earlier findings on the protective effects of socialization on the immune system.

In a study involving 404 healthy adults, Cohen and his team studied the effects of perceived social support and the receipt of hugs on the participants’ susceptibility to developing the common cold after being “exposed to the virus.” (To my knowledge, true isolation and purification were not necessarily achieved—and rarely, if ever, are, in truth—but that’s another article for another day.)

“Hugging protects people who are under stress from the increased risk for colds [that’s] usually associated with stress,” said Cohen, adding that hugging “is a marker of intimacy and helps generate the feeling that others are there to help in the face of adversity.”[vi]

In simple terms, basic physical expressions of affection and friendship (aka love) helps to keep colds and flu away.

Loneliness worsens depression, causes fragmented sleep and is tied to a higher risk of developing Alzheimer’s disease, studies show. Loneliness has several physiological effects, Cacioppo says, like making blood vessels more resistant to blood flow. The resulting rise in blood pressure shows up in older adults a few years later … Choice is the difference between being alone and being lonely, Cacioppo says—loneliness happens when people are forced to be alone.[vii]

A final note on hugs:

A 2008 study found that doses of oxytocin supported several immune functions and reduced the negative effects of bacterial endotoxin in a group of men.

Oxytocin treatment resulted in a transient or prolonged reduction of endotoxin-induced increases in plasma ACTH, cortisol, procalcitonin, and a number of other immune measures. “In summary, oxytocin decreases the neuroendocrine and cytokine activation caused by bacterial endotoxin.”[viii]

In other words, oxytocin (and the hugs that release it) are immune-boosting and protective.

Why does no one discuss the many immune-enhancing BENEFITS of social contact? We only ever hear about the supposed negatives as we are corralled into our homes-cum-prisons.

Once the fear sets in, it’s hard to think straight. Ask yourself if the media’s reporting on “COVID-19” might not be a tad biased and perhaps even deliberately sensationalist and fear-inducing …

Cognitively speaking, once we are triggered into fear we are effectively less intelligent and mentally flexible.

Why would our governments and mass media report news and events in a way that puts people into a state of fearful, unthinking paralysis?

Who benefits? We continue our investigation in Part 2—stay tuned.