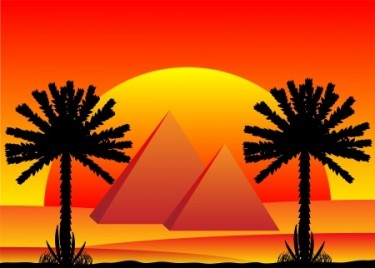 The most celebrated pyramids are those at Giza, built during the fourth dynasty, of which the largest is the one that housed the pharaoh Khufu, better known as Cheops. This is now called the Great Pyramid.

Some years ago it was visited by a French hardware store owner and author named Antoine Bovis. It is said that Bovis took refuge from the midday sun in the pharaoh’s chamber, which is situated in the center of the pyramid, exactly one third of the way up the base.

He found it unusually humid there, but what really surprised him were the garbage cans that contained, among the usual tourist litter, the bodies of a cat and some small desert animals that had wandered into the pyramid and died there. Despite the humidity, none of them had decayed but just dried out like mummies.

He began to wonder whether the pharaohs had really been so carefully embalmed by their subjects after all, or whether there was something about the pyramids themselves that preserved bodies in a mummified condition.

Bovis made an accurate scale model of the Cheops pyramid and placed it, like the original, with the base lines facing precisely north-south and east-west. Inside the model, one third of the way up, he put a dead cat. It became mummified, and he concluded that the pyramid promoted rapid dehydration.

Reports of this discovery attracted the attention of Karel Drbal, a radio engineer in Prague, who repeated the experiment with several dead animals and concluded, “There is a relation between the shape of the space inside the pyramid and the physical, chemical, and biological processes going on inside the space. By using suitable forms and shapes, we should be able to make processes occur faster or delay them.”

Drbal remembered an old superstition which claimed that a razor left in the light of the moon became blunted. He tried putting one under his model pyramid, but nothing happened, so he went on shaving with until it was blunt, and then put it back in the pyramid. It became sharp again.

Getting a good razor blade was difficult in many Eastern European countries at the time, so Drbal tried to patent and market his discovery. The patent office in Prague refused to consider it until their chief scientist had tried building a model himself and found that it worked. So the Cheops Pyramid Razor Blade Sharpener was registered in 1959 under the Czechoslovakian Republic Patent No. 91304, and a factory soon began to turn out miniature cardboard pyramids. During the 1970s they made them in Styrofoam.

The edge of a razor blade has a crystal structure. Crystals are almost alive, in that they grow by reproducing themselves. When a blade becomes blunted, some of the crystals on the edge, where they are only one layer thick, are rubbed off. Theoretically, there is no reason why they should not replace themselves in time.

Sunlight has a field that points in all directions, but sunlight reflected from an object such as the moon is partly polarized, vibrating mostly in one direction. This could conceivably destroy the edge of a blade left in moonlight, but it does not explain the reverse action of the pyramid.

It can be surmised that the Great Pyramid and its little imitations act as lenses that focus energy or as resonators that collect energy, which encourages crystal growth. The pyramid shape itself is very much like that of a crystal of magnetite, so it may build up a magnetic field. Author Lyall Watson kept a Wilkinson Sword blade sharp for four months despite continuous daily use using a miniature pyramid.

A model pyramid can be made using the following method:

Cut four pieces of heavy cardboard into isosceles triangles with the proportion base to sides of 15.7 to 14.94. Tape these together so that the pyramid stands exactly 10.0 of the same units high. Orient it precisely so that the base lines face magnetic north-south and east-west. Make a stand 3.33 units high and place it directly under the apex of the pyramid to hold your objects. The sharp edges of the blade should face east and west. Keep the whole thing away from electrical devices.

In 1968 a team of scientists from the United States and Ein Shams University in Cairo began a million-dollar project to X-ray the pyramid of Chephren, successor to Cheops. They hoped to find new vaults hidden in the six million tons of stone by placing detectors in a chamber at its base and measuring the amount of cosmic ray penetration, the theory being that more rays would come through hollow areas.

The recorders ran twenty-four hours a day for more than a year until, in early 1969, the latest (at the time) IBM 1130 computer was delivered to the university for analysis of the tapes. Six months later the scientists had to admit defeat: the pyramid made no sense at all.

Tapes recorded with the same equipment from the same point on successive days showed totally different cosmic-ray patterns. The leader of the project, Amr Gohed, in an interview afterward said, “This is scientifically impossible. Call it what you will—occultism, the curse of the pharaohs, sorcery, or magic, there is some force that defies the laws of science at work in the pyramid.”

Jules Green of the Psychical Research Society experimented with flowers. Taking four roses, he placed two under pyramids, one under a cube, and one in the open air. He did the same with four tulips. After a week, the flowers exposed to the air had withered, while the others were still fresh. The roses and tulips in the pyramids, however, had actually grown.

Not surprisingly, people experience enhanced effects when meditating beneath pyramids. Changes in the meditator’s aura  have been noted with Kirlian photography—auras become brighter and larger.

Experiments have shown copper to be the best metal for an open-frame meditation pyramid, due to its natural electronic and bio-enhancing properties. However, pyramid structures of cardboard, wood or bamboo are also effective, if built to the same proportional dimensions as the Great Pyramid.

Pyramids have also been found to:

Julian Websdale is an independent researcher in the fields of esoteric science and metaphysics and a self-initiate of the Western Esoteric Tradition. His interest in these subjects began in 1988. Julian was born in England, received his education as an electronic and computer engineer from the University of Bolton, served in a Vaishnava monastery during 2010, and has traveled to over twenty-one countries. He is also a member of the Palestine Solidarity Campaign. Connect with Julian on Facebook here.