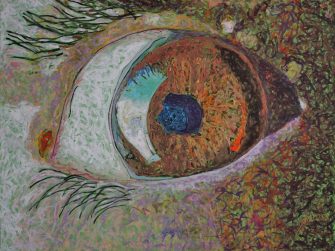 Max awoke with a start, still half in the dream world and expecting to find himself alone under a blazing sun on a deserted beach. Instead, removing his mask, he discovered Tuesday seated beside him lit up by the searing light from his desk lamp gently squeezing his shoulder.

“Tuesday?” he asked, squinting in the brightness.

“Me, too, old boy,” said Raul, who Max realized as his eyes adjusted was seated in his chair just behind Tuesday in the lamp’s penumbra.

“What time is it?” asked Max, sitting up, yawning, and looking around confusedly while still clutching Pablo. Without his contacts, his vision was far from perfect, though at such close range he was able to make out the contours of things.

“I’m sure you were. Was Pablo beditating with you?”

“He was teaching me how to beditate.”

“How was your meeting with Professor Icarus?” asked Tuesday.

“Couldn’t this have waited?”

Max was starting to get his bearings. Tuesday’s question about Professor Icarus opened the floodgates on the day’s events—which poured back into his consciousness like a waterfall. “Our meeting was … enlightening. So was reading my mother’s essay on cryptids,” he replied, motioning toward the old manuscript he had left on top of his desk.

“Cryptology, did you say?” asked Raul.

“Cryptids,” said Max. “Creatures that are hard to explain. Like yourself.”

“What did you find out?” asked Tuesday.

“… disappeared into the Bermuda Triangle.”

“Oh, I could have told you that,” said Tuesday.

“It was obvious, wasn’t it? You dreamed about him vanishing into a vortex resembling the eye of a hurricane. But it was after hurricane season when he actually disappeared.”

The simple, indisputable logic of Tuesday’s observation momentarily stunned Max. Hurricane season in the Gulf ran from June through November, with few major storms occurring after October. His father disappeared January 1st. “How long have you known?” he asked at last.

“Since right after it happened. Mom and I independently reached the same conclusion.”

“Why didn’t you say something?”

“But you wouldn’t listen. Remember the Cold War years of your adolescence?”

“I’m listening,” interjected Raul. “And I still don’t understand a bloody thing you two are saying. What’s this mumbo jumbo about the Bermuda Triangle?”

“If only it were mumbo jumbo,” said Max. “It seems the Bermuda Triangle constitutes a wormhole into time-space. My mother actually called it a vortex point. That’s why so many people—including my father, apparently—just blip out in that area.”

“He didn’t confirm it. He just explained how it could be possible—and my mother posthumously filled in some of the technical details.”

“Did the professor think Captain Diver might be in actual danger, Max?”

“What are you going to do?”

Tuesday shifted in her chair and sighed audibly. “Well, maybe what Raul and I just discovered will help you decide.”

“What you just … discovered?”

“Are you sure you want to see this, old chap?”

Raul pulled up a website on his iPhone, which he leaned forward and handed to Max. The site was dedicated to exposing some sort of conspiracy theory about European scientists who, a quarter of a century ago, had supposedly developed a mind-control methodology using microchips to scramble brainwaves called Operation Paper Cut.

“Hand me my glasses, will you?” said Max.

After putting on his glasses, Max continued reading. He learned that this group of researchers—many of whom were students of Nazi scientists—had reputedly inherited a great deal of dangerous knowledge (including much of an esoteric nature) straight from the Third Reich, which was infamously obsessed with utilizing the paranormal for planetary control.

“Well, this is a fascinating website,” said Max. “But I don’t really see how it applies to me.”

“Scroll down to the group photo,” suggested Raul.

Max scrolled down until he found an old Polaroid of the scientists allegedly behind Operation Paper Cut. The photograph was taken in a sunlit park, identified as Luxembourg Gardens in Paris, and featured ten Caucasian men of varying ages dressed in lab jackets in two rows of five. “I still don’t get it,” he said.

“Check out the scientist with round glasses in the first row,” said Tuesday.

Max could hardly believe his eyes. There, without question, wearing wire-rimmed glasses on his thin, carved face, was a younger version of Dr. Morrow!

“Then why does the caption identify him as Guillaume Demain?”

“I wondered the same thing,” said Raul. “Until it dawned on me, thanks to my years of French, which had previously only come in handy at restaurants and in a handful of amorous encounters, that Guillaume Demain translates to—”

“He must have changed his name,” said Tuesday, “when he came to the United States to work for—”

“I think I always knew. I think even my father suspected and hinted at it many times.”

“There’s definitely a historical precedent,” said Tuesday. “After World War II, a number of Nazi scientists involved in all kinds of black ops were recruited to work for the United States by the CIA through something called Operation Paperclip.”

“Probably some of the same bastards who mentored Demain,” put in Raul.

“Max, do you think your father knew the specifics about Dr. Morrow’s past?” asked Tuesday.

“Raul and I followed up with some additional research on the Demain-Morrow connection,” said Tuesday.

“It appears he wasn’t just a mind-controlling microchipper,” said Raul. “That was small potatoes. He was also quite keen on harnessing the power of—”

“Crikey, Max. Could we please be allowed to finish our own sentences?”

“Rumor has it,” continued Tuesday, “that Demain, now going by Morrow, started a special CIA program under cover of the Navy called Project Thunderbird.”

“Kind of strange, huh? Anyway, the story goes Project Thunderbird’s object was to establish a bridge between the cosmic and material sectors in order to gain access to unlimited energy—and thus unlimited power.”

“This must be why Morrow has always been so interested in you,” said Tuesday.

“Because he thinks he can use me to establish the bridge?”

“He thinks you can be the bridge,” said Raul. “Under his direct mind control.”

“No crazier than levitating objects, my friend.”

With the distinct impression his life was quickly funneling down to a single point of choice that was more like an inevitability, Max considered this new wave of information. Like most things that initially struck him as absurd, he reluctantly conceded that every bit of it was probably true.

“Raul, you said there was a way to be sure about the nature of my father’s involvement with Project Thunderbird.”

“What if the truth isn’t pleasant, Max?” asked Tuesday. “What if you learn that your father was … brainwashed?”

“Whatever I find out,” said Max, “I don’t think it will change what I do. But at least I’ll be doing it with eyes wide open.”

“So you really want to go through with it?” asked Raul. “Even if it means risking getting expelled—or worse?”

“I really want to hear what you have in mind. Then I’ll consider my options.”

“Understood. Why don’t you get dressed and we can all go down to the kitchen. I’ll make us some tapioca pudding while we chat. I’m thoroughly famished.”