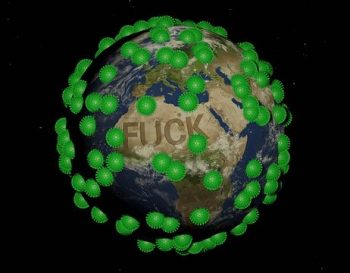 TRUTH OR CONSEQUENCES, NEW MEXICO—Today’s astonishing news about SARS-CoV-2, the virus that causes the universally feared condition known as COVID-19, is that this ubiquitous germ isn’t just smart enough to tell the difference between a “peaceful riot” (where it’s safe to congregate) and an outdoor religious service.

SARS-CoV-2 can apparently survive indefinitely in highly contagious form outside the human body up to a mile below the ocean’s surface.

This means that humans aren’t the only earth species staring at an extinction-level event (ELE). A variety of fish including most sharks, as well as several varieties of dolphins and whales, have also tested positive to underwater PCR swabs.

The disturbing news comes on the heels of the discovery by scientists at Kalamazoo’s Technical Tech University that SARS-CoV-2 is far more than simply airborne.

The virus is, quite literally, space-borne—having infected both astronauts and cosmonauts at the International Space Station as soon as they irresponsibly took off their masks when their oxygen tanks ran out.

Thus it appears social distancing requirements will need to be greatly, greatly extended.

More frightening still, virologists at the Institute of Germ Theory & Religious Studies have found that SARS-CoV-2 is capable of reinfecting individuals a theoretically infinite number of times.

This is true despite the production of antibodies that are said to provide immunity to this horrifying plague that has locked down and virtually destroyed the entire global economy because, you know, Bill Gates.

The cure indeed may be worse than the disease, yet this writer stands in awe of our frontline scientists who—even though the CDC has admitted that an isolated sample of SARS-CoV-2 “is not available”—have somehow still managed to create a vaccine for this planetary scourge … and that in record time.

Since everyone knows vaccines are so safe and effective their manufacturers don’t need to fear any liability whatsoever, no doubt a COVID-19 vaccine will allow the world’s population to return, though microchipped and genetically modified, if not to normal, then at least to a New Normal.

* Enjoy more satire by this author inspired by COVID-1984 here, here, and here *