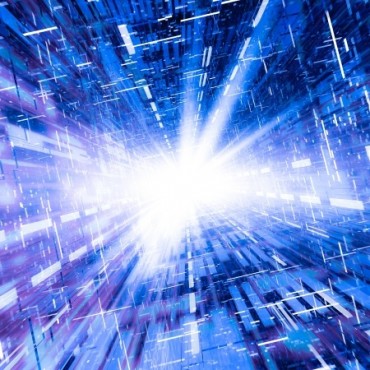 One of the best questions a person asks himself is, “What if …?”

People do ask themselves that question all the time, but they rarely take it seriously.

“What if …” sets up a kind of parallel universe, in which things are quite different.

It’s no surprise that artists ask the question; then they answer it with novels and plays and paintings and films.

For the individual, the question always suggests taking a new course in life, changing the old framework. As one edges closer to initiating action, body and mind and psyche go into an anticipatory state of high energy.

It’s especially good because the subconscious sees new possibility, and not just along one line; it sees multiple dimensions of action—trees sprouting many branches.

It’s as if the old you were moving along a single path … and now you have length, breadth, and depth.

The individual treats the subconscious as if its material can only fit into a single thin stream of information.

As an analogy, consider an order coming down that the Michelangelo Sistine Chapel, wall and ceiling, must be laid out flat in a single plane, or that all the characters in Velazquez’ MAIDS OF HONOR must be standing along side the central child, Infanta Margaret Theresa, in the foreground of the painting.

When “What if …?” is asked and answered in its full scope, the person not only sees a new life but a new kind of life, in which a goal connects to multiple dimensions.

What this means for the seeker is far from an habitual response. It entails exploration. It implies a creative life.

Instead of imagining a few lamps that go on in a dark room, we are talking about numerous points of illumination that reveal a mansion with many wings.

We move from a single point to a line to two-dimensional figures to volume in three dimensions, to more and more previously unseen dimensions.

The subconscious is thus given its due and liberated.

The invention of film was an event to suit this state of affairs. A number of the earliest films were really dreams placed on the screen. They subordinated a simple story to miraculous happenings that occur in dreams. Happenings that surpass the so-called laws of the space-time continuum.

The creative life, lived by and through imagination, will naturally expand to include more and more dimensions, unless throttled.

“What if …?” then, finally, is answered, not by some trained android system, but by the imagination.

A person’s past, and what happened in that past, is no longer a cultural artifact for explaining how and why the individual is limited in the present, but instead is seen as buds that can bloom into an infinite variety of Future.

The fulfillment of desire in the physical world seems to operate on one basic idea: discover what you want and go get it. However, when you follow that path with imagination, new spaces swim into view, new objectives, new branches on the tree.

This kind of expansion reflects what Self is really after: unlimited creation.

The cells of the body, the brain, the mind, the consciousness, the subconscious are all waiting for that, are all hoping for it, are all geared up for it.

Whether they are all dressed up with nowhere to go … or will be enlisted in a grand adventure, is up to the individual himself.

The illusion presented by the physical world is: one objective, one course of action, one strategy. But even in the realm of science, we see this is only a partial explanation of what is going on. When breakthroughs are made, they are accomplished through leaps of imagination. There are gaps between what was previously known and what is suddenly known now.

Those gaps aren’t crossed by purely rational means. In retrospect it may seem that way, it may be told that way, but the discoverer and the inventor are accessing and creating solutions by introducing new dimensions.

In a person’s life, the same approach applies. There are endless opportunities for imagining and creating new roads.

In many fields of alternative inquiry—history, archeology, science, economics, etc., undisclosed dimensions are revealed. So it is with the human being himself and his creative potential. What is considered hard fact dissolves, and imagination comes to the fore as the alchemical force that transmutes a few dimensions into an unlimited number.

Our societies, civilizations, and traditional teachings (indoctrination) seek to exclude and bury this infinity.

(Thanks to Steve Candidus. His insights in our discussion prompted several of the ideas in this article.)

The author of two explosive collections, THE MATRIX REVEALED AND EXIT FROM THE MATRIX, Jon Rappoport was a candidate for a US Congressional seat in the 29th District of California. Nominated for a Pulitzer Prize, he has worked as an investigative reporter for thirty years, writing articles on politics, medicine and health for CBS HEALTHWATCH, LA WEEKLY, SPIN MAGAZINE, STERN, and other newspapers and magazines in the US and Europe. Jon has delivered lectures and seminars on global politics, health, logic and creative power to audiences around the world. You can sign up for his free emails at www.nomorefakenews.com.